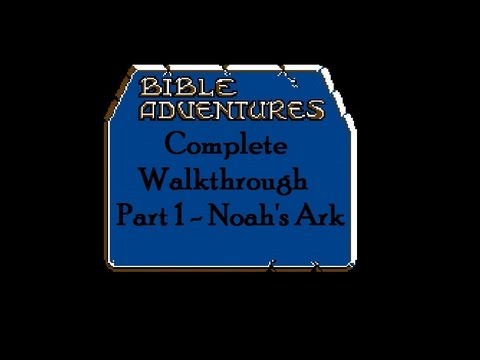 Bible Adventures is a Christian video game by Wisdom Tree and not sold through video game retailers, first released in 1991 for the NES, and re-released in 1995 for the Sega Mega Drive/Sega Genesis. It contains three different games: Noah’s Ark, Baby Moses, and David and Goliath, all of which are based rather loosely on stories from the Bible. The gameplay of these games is sidescroller style similar to that of Super Mario Bros. 2 for the Nintendo Entertainment System. The game also features Jesu, Joy of Man’s Desiring, by J. S. Bach, as the background music for the title screen.

The game was a collection of three games based on stories contained in the Old Testament:

In Noah’s Ark, the player must round up animals and food—sometimes by knocking animals out with an object that resembles a barrel or catching fruit thrown by a monkey—and carry them onto the Ark. Noah’s health is recharged when the player reads Bible verses that are scattered around the four levels. Snakes seen on the trees are decoys, the real snakes the player has to capture are inside of a cave.

In Baby Moses, the player controls Miriam, Moses’ sister as she tries to save her brother from the Pharaoh’s decree that all male Hebrew children be killed. In order to do this, the player carries Moses from one end of the level to the other, in a manner quite similar to the way in which characters in Super Mario Bros. 2 carry vegetables. Moses can be thrown around without harming him, but enemies cannot be harmed in any way. The adversaries attempt to throw Moses into the Nile. If the player completes the level without Moses, the game says “Good work, but you forgot Baby Moses.” and the level must be restarted.

In David and Goliath, the player starts out controlling David as he herds sheep and avoids predators such as lions and bears. Acorns can be used to stun the beasts. The player then obtains a sling and goes on to dodge guards, scorpions, and stones before he fights Goliath’s shield bearer and ultimately Goliath himself, whom the player must strike once in the head to defeat.

The game has been criticized for being overly didactic (e.g., gameplay is broken up by Bible verses), for being highly derivative of Super Mario Bros. 2, and for generally bad gameplay. The Angry Video Game Nerd reviewed the game and said it was awful. It also has been criticized for its recycling of its other levels; each level basically has the same gameplay and same style of gameplay. Nevertheless, it reportedly sold 350,000 copies in Christian bookstores.