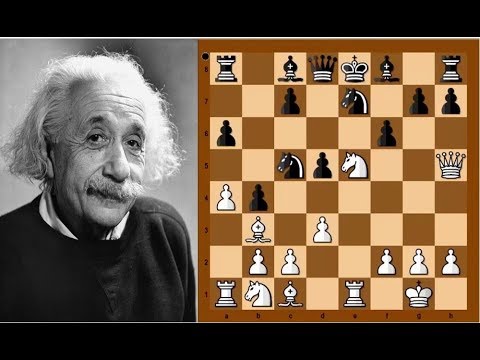 What is it about the strong chess players’ and grandmasters’ way of thinking and strategies that makes these players stronger and helps them to gain more victories? Learn from the FREE course “Secrets of Strong Chess Players” –

Albert Einstein, born March 14, 1879, was a theoretical physicist who is widely regarded as the greatest scientist of the 20th century. He received the 1921 Nobel Prize in Physics “for his services to theoretical physics, and especially for his discovery of the law of the photoelectric effect”, a pivotal step in the development of quantum theory.

Einstein had an interest in chess. In 1936, he told a reporter that he played chess as a boy. In 1927 Einstein met Emanuel Lasker in Berlin, and they became good friends. Einstein called Lasker “a Renaissance man.”

In 1931 a pamphlet was written called “One Hundred Authors Against Einstein.” One of the authors was Emanuel Lasker. Lasker thought Einstein’s theory of relativity was wrong and that the speed of light was limited due to particles in space. Lasker did not think there was a perfect vacuum.